warhunt: 6/10
middle of ww2 and all that going for war but they stumble upon a forest and well that is when things go bad, was better than i expected it to be with that supernatural element to it

last letter from your lover: 4/10
this was below avg for sure, shailene woodley in it but the movies a borefest tbh

nobody sleeps in the woods tonight 2: 6.5/10
sequel to the the movie, this was a reverse to the first one haha. they totally pulled a 180 here.

the perfect storm: 6.5/10
didnt saw this before with a big cast here, mark wahlberg, diane lane, george clooney, movie is based on real events.

intrusion: 6.5/10
this was better than i had expected, the thriller and suspense was good though very slow the movie was it was rather fine by the end and the conclusion was satisfying enough

confession: 5/10
starring stepehen moyer, this was a very slow suspense movie, had the mystery to it and by the end it wasn't much satisfying tbh. was so so

wish dragon: 6.5/10
this here is the chinese variant of aladdin yes ditto to aladdin but with a dragon.

munich the edge of war: 7/10
quite liked this one, chamberlain and hitler meeting and such for their treaty which was later on an year cancelled and the great war began

game changer: 6/10
saw this on netflix, thai movie, the criminal boss dies and his subordinates try to run his business, funny drama

gold: 5.5/10
zac effron stars in this survival movie, its quite slow and was a let down atleast to me

the requin: 6/10
alicia silverstone making her comeback in this stranded on sea kinda movie when a disaster strikes her vacation

the fallout: 6/10
the movie was fine, shows a school shooting an after effects ptsd on the student

clean: 6.5/10
stars adrien brody and this over here is a mild version of john wick or so.

a shot through the wall: 6/10
a movie about accidental shooting and how that was deemed as a racist event and got on the officers life and all that

7 prisoners; 5.5/10
i was hoping that we get to see something by the end but it was not what i had expected.

ohh man its Nolan style cinematography here, all grounded and no cgi BS. the themes and dialogues just goosebumps plus the intro sequences to batman were amazing. a 3 hour long movie looks like wb execs gave reeves full creativity to work around and it shows. getting rave reviews no doubt. finally we get a batman movie detective style. mind you if your'e expecting alot of action and stuff keep calm and carry on elsewhere coz this batman movie is a mix of different comics and such combined into a different story. a good detective one which batman always started with.

i was really amazed by colin farrel as penguins character here totally changed i could see that from the trailers and just heard that penguins own show is coming as well would def want to see that.

paul dano this mofo is a crazed method actor, his persona with the mask was awesome, without he was a bit too baby face for my liking but his acting took it away as always.

pattinson, man i had my doubts but he did a good job, well done. he fit the boots for year 2 batman just right.

zoe as catwoman, she did good too, for her role and her acting it was fine.

jim gordon, another good one here

alfred well i was expecting more from him in a 3 hour long movie but tbh he got the short snub here imo. would had liked to see more of him

no after credits scene here but


Spoiler: show
the after credits scene they put in right at the end of the movie it seems when riddler is in arkham WHO IS THAT GUY , def joker by the laugh of this universe ohh man,.. seemed two face by this face type but his laugh was joker all right"

now its directed by michael bay so expect big booms and explosions and this is exactly what this movie had, jaky gylenhaal had a good character to play with, he was both funny and serious in this one. yahya abdul mateen was the quite honest character here with a moral compass, eiza gonzalez was the candy yeah he mbay likes to do that.

anyways the movie turned out to be a better than i had expected, had a good story and lept me entertained throughout the full car chase movie which it was. yes the whole movies a big chase sequence ...

saw "the lost city" at cinestar ATC on friday night 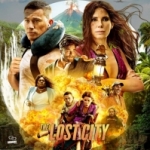 ok so the movie tried to be funny without being too overly funny but i think that was a major flaw here, the jokes were being delivered etc but the excitment from the actors just wasn't there.. had a good cast with surprise cameos and such and stuff but as i said something was missing and that pitched the movie down a bit. overall stay at home sunday movie

I recently saw A Time to Kill on Prime.

The film received mostly positive reviews when released in 1996. It was also a commercial success as people were attracted to the A-list cast that included Matthew McConaughey , Sandra Bullock, Samuel Jackson, Kevin Spacey, and Oliver Platt.