Shadow of the Tomb Raider - Review

We all create destiny.

Let me start off by saying that SOTR is a fantastic game. In many ways, it reminds of UC 4. The story this time around is much mature, more symbolic, has a message with deep emotional tones and offers a fantastic end to the TR trilogy. Evermore so, it offers us a Lara that has both the hallmarks of a good and bad person, a saviour and destroyer, traits that are grounded in, what I can only call a good sense of reality if nothing else. She begins as a selfish, revengeful and irresponsible person and by the end transitions to being an understanding, emotional and responsible character. Story:
Lara is after the evil organization Trinity again, in a race against time to recover two artefacts that will decide the fate of the world, and goes to Peru. The game has a great many motifs running through it which is otherwise, a rather straightforward story. But this time around, the narrative comes back to haunt Lara, the consequences of her actions, which are not always pretty, have caused harm to many people. A lot of people have negatively commented on the internet against this “White man’s explorer guilt” that Lara carries. Taking away artefacts and causing havoc is not always good for the natives and the game slaps that in the player’s face in the wee hours of the game when, Lara, despite warnings, removes an ancient artefact that causes a natural disaster, effectively eliminating an entire city. And while this theme runs in the background of the entire game, I believe, it is rather a nice turn for the devs to put this in the narrative. Otherwise, we may have well been playing another Just Cause or Farcry – games with an utter lack of character and story. It is exactly because of this deep emotional conflict that Lara feels, is what makes her transition particularly interesting. Amaru, the main antagonist, wants to rebuild the world by invoking human sacrifice and supernatural powers to save his people and the ancient city of Paititi. This is a villain with a cause; a modern-day rebel who fears intrusion of foreigners and the chaos that they often bring. Thus, the idea of being an outsider, not belonging, and middling in another culture against their own interest is a crucial part of the game. The story also shows Lara as an often mistaken but nonetheless firm adventurer. She is sometimes selfish and at others, just ridden with guilt. Every decision is agony. But we get to see her make mistakes, fumble, fear and react, triumph and fail. You can’t say that about many protagonists in games, much less AAA ones. Also, in one section of the game, Lara just snaps and literally goes off on a rampage- drive in order to take revenge for the death of a friend – consumed with wrath and fury – I loved it. And finally, we see Lara, not only put an end to Trinity and save the world but also overcome her fear, anger and emotional conflict to realize that exploring alone isn’t adventurous; building a better future also is. Lara dies in a way and is resurrected – exorcised off of her demons. 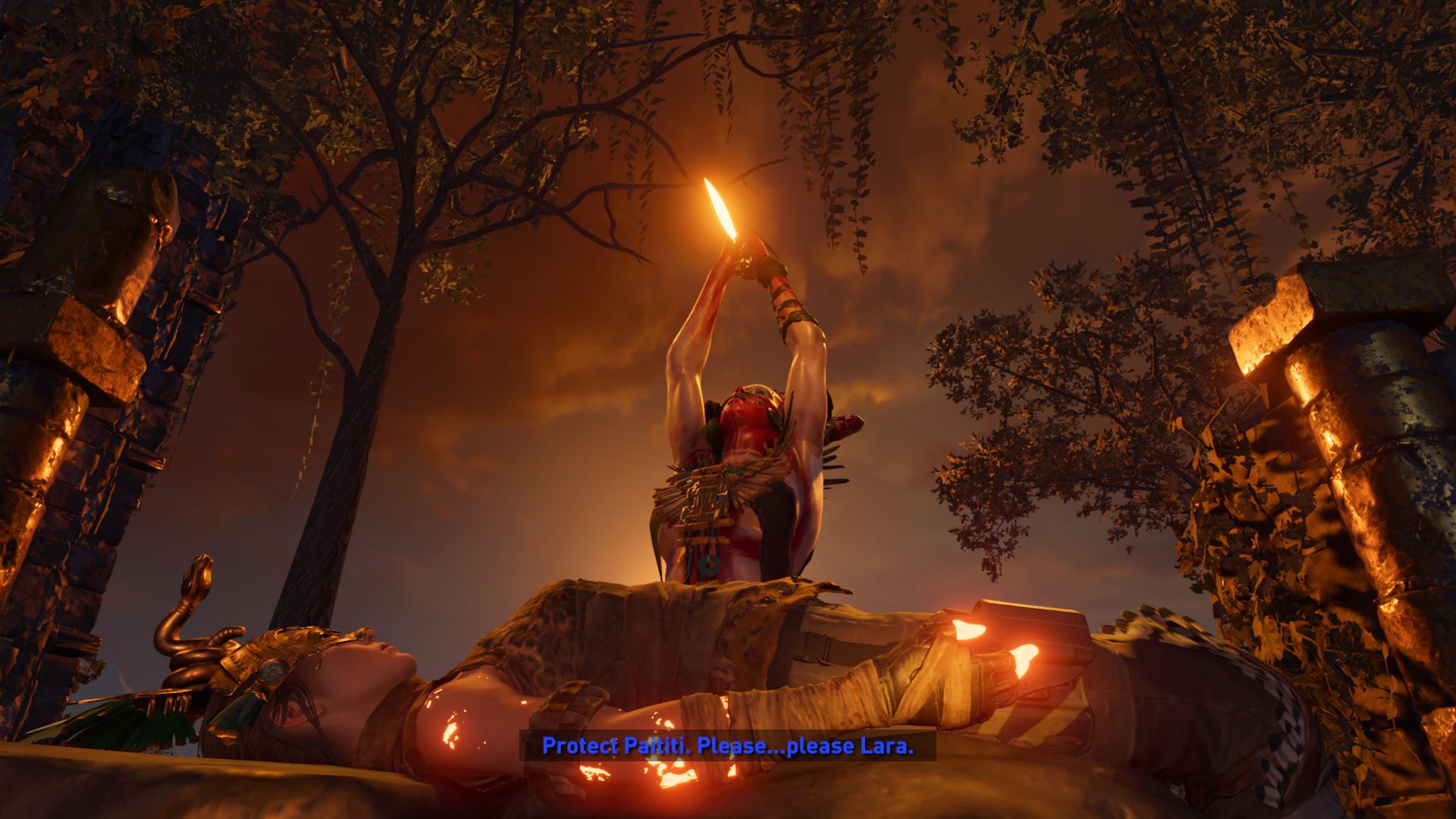 I hope the devs can take this ending to a meaningful new game, whenever that may happen.

Gameplay:
The Narrative is tight, and although exploration is encouraged, it always feels restricted. However, this time around the world is bigger and filled with more content than before. Besides the game world is split into many areas both large and small, the game features nine challenge tombs, all of which give a special bonus ability to Lara on successful completion. The puzzles are sometimes okay – for the most part – and don’t require too much of brain-crunching; besides, the game never fails to inform you of what to do next, which almost always breaks immersion when you are cleverly trying to solve a puzzle. 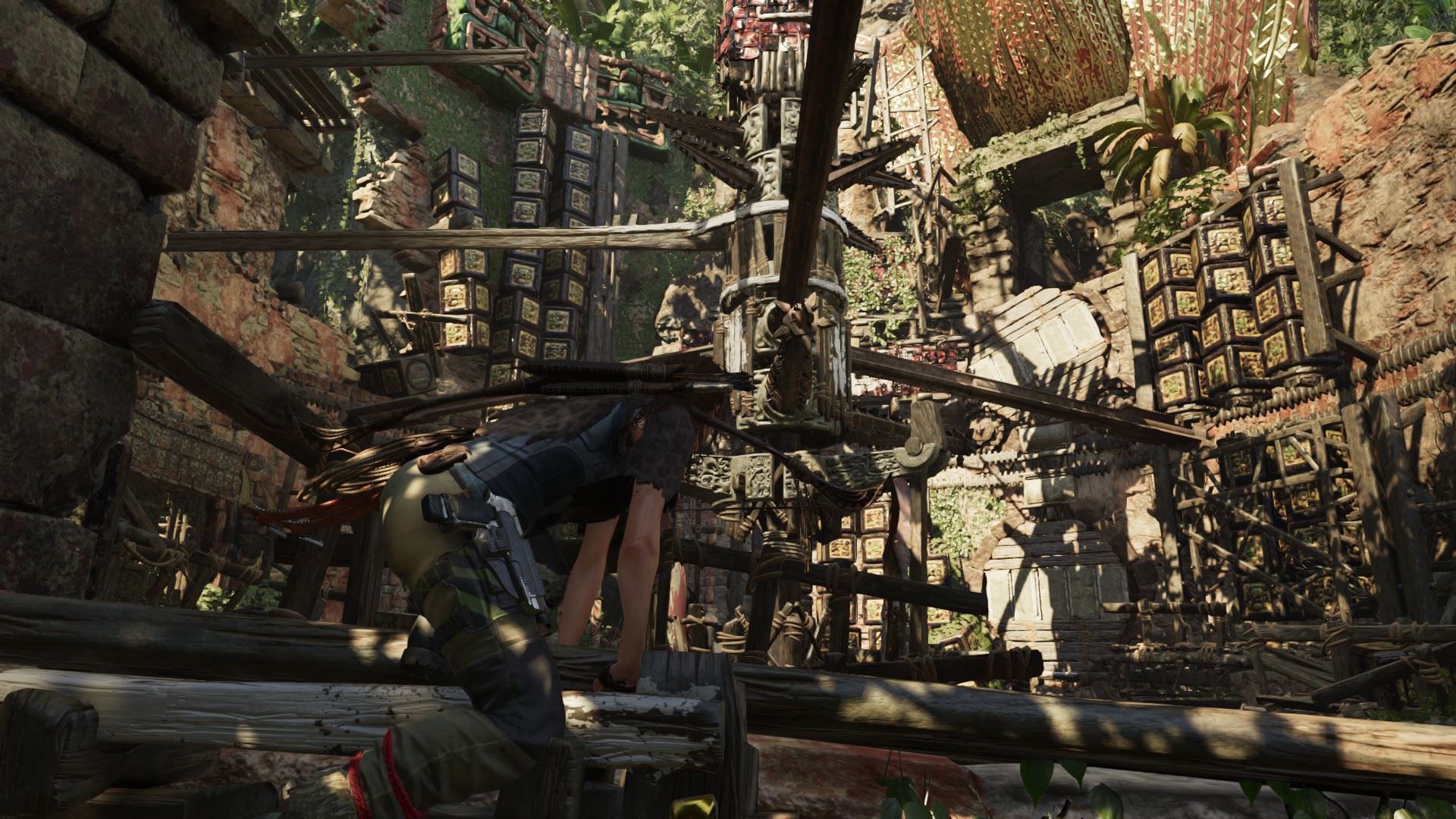 In addition to Challenge Tombs, the game features several underground crypts which also reward Lara with unique outfits that carry special bonus effects, these range from gaining more XP to reducing damage during combat and many others. There is also, a rather simple, skill tree that you unlock abilities from via skill points. These points are gathered by gaining experience, that in turn happens by doing main and side missions and hunting.

Scavenging is a big part of the game and you can gather resources from all parts of the game world – there’s no shortage of it in fact. Merchants are spread (rather scarcely) on the map but they do offer trade options. Lara can trade almost anything she collects for resource capacity bags, ammo, herbs, supplies, weapons and outfits. As a matter of fact, by the mid-game, you can have so many resources with you that it is literally impossible to carry anything more. You’d have to go back and sell stuff off as Lara can’t drop items from her inventory which is irritating as you can only travel from a campfire to another campfire. 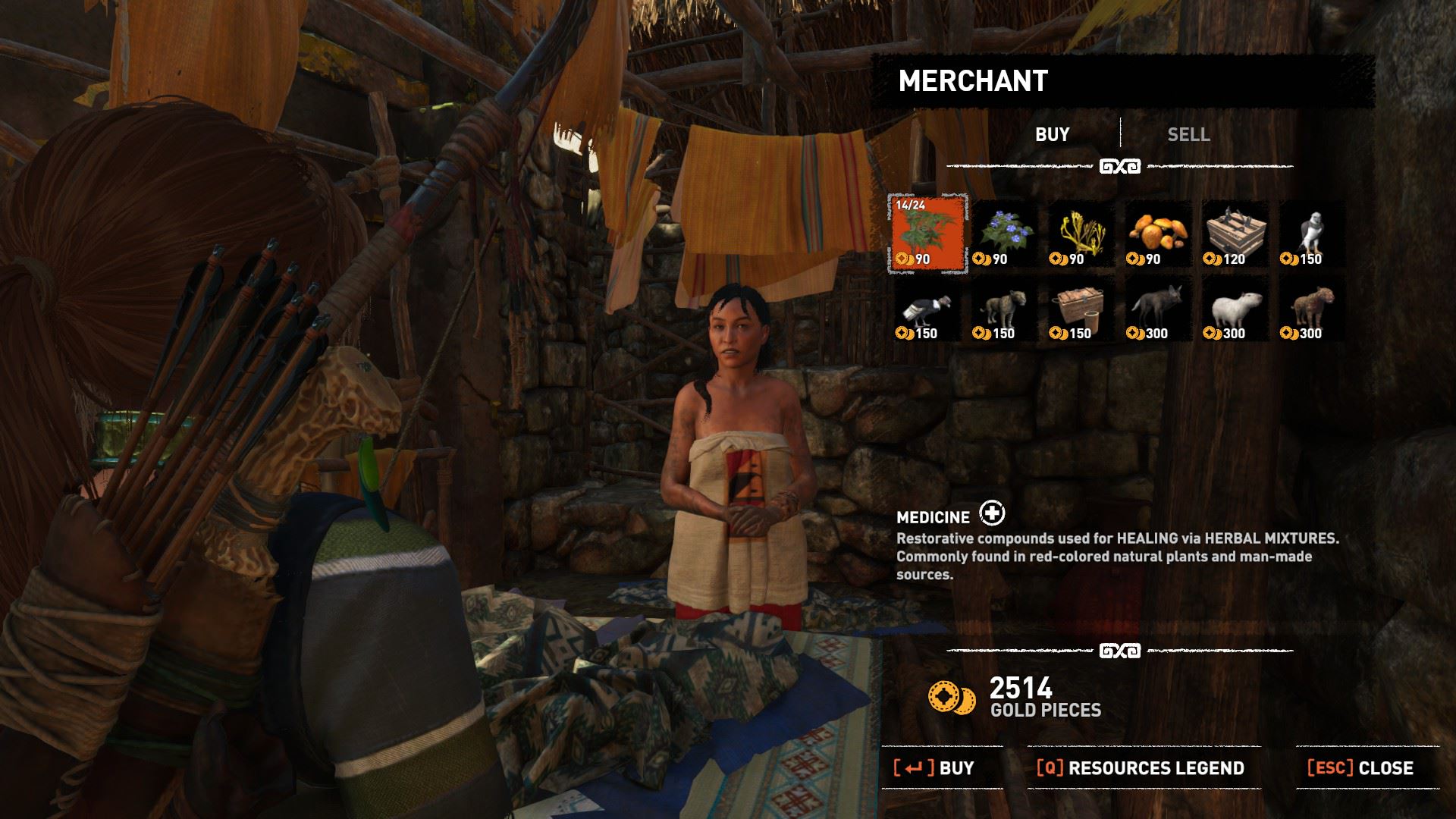 On a side note, the game respawns all loot available in an area if you fast travel back to it. This seems to be a bug to me and might be fixed soon, but until that happens, its one of the best ways to gain some loot to trade in order to buy better equipment.

Many of the game mechanics return from its previous entries and this is instantly recognizable in the game. There is also more jumping, climbing, hanging, swimming, collecting then there are gunfights. However, there is a particular emphasis on swimming this time around. The locales are quite beautiful and the voice acting is superb. You can even turn on an option which enables every dialogue in the game to be voiced in its own native tongue, not that I think it was helpful but still. 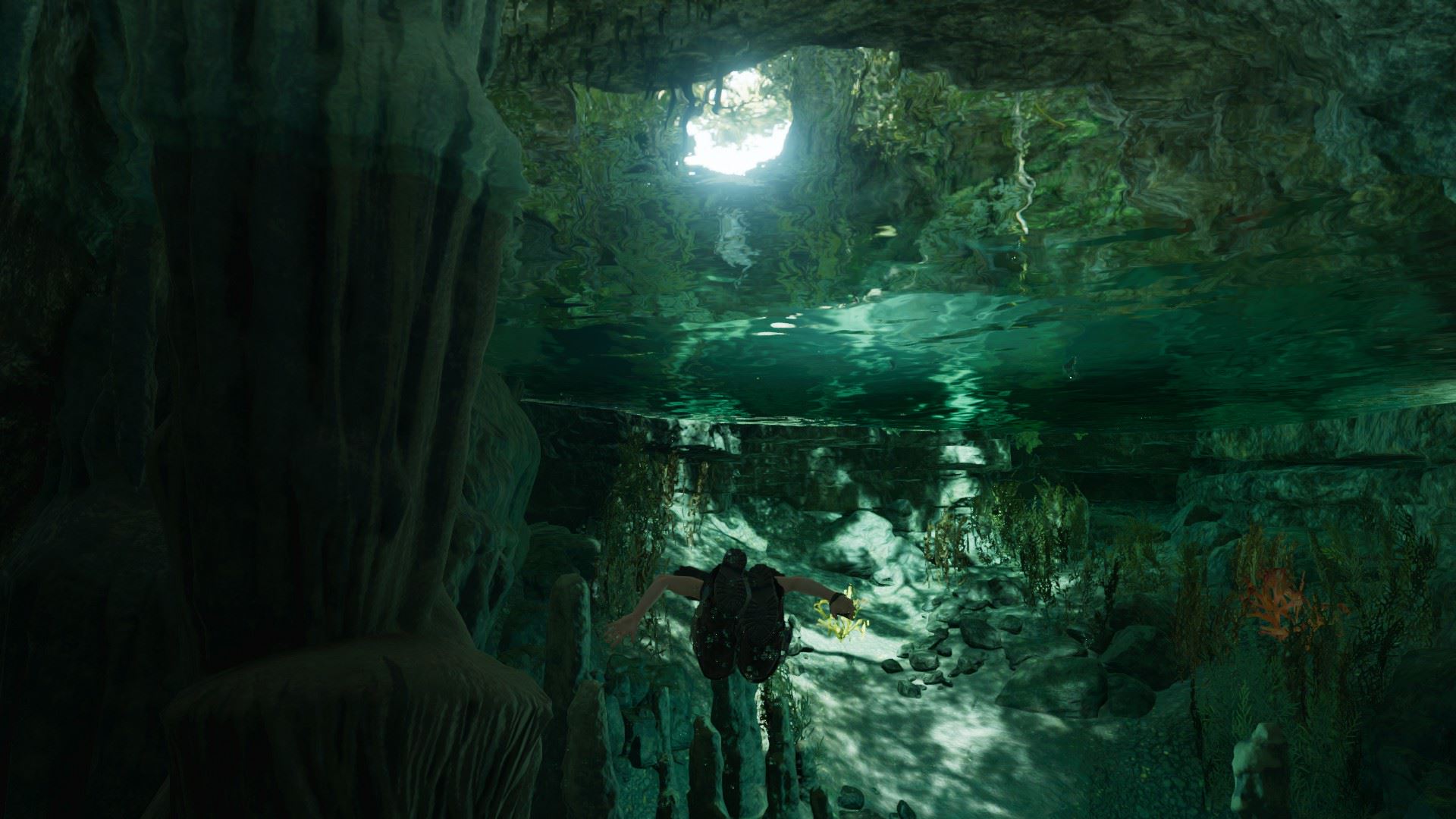 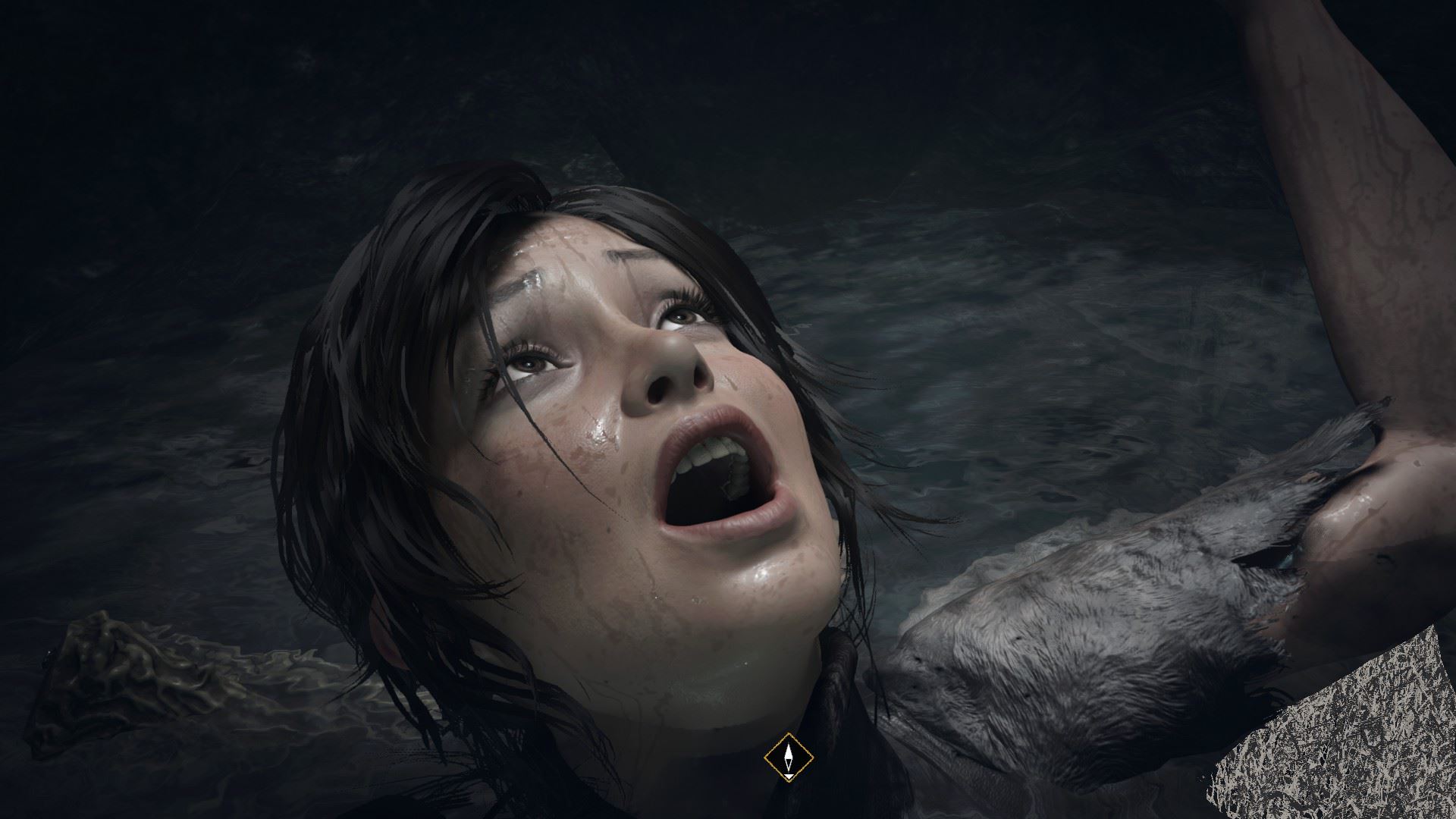 The game is technically glitchy at times. Lara can misjudge a jump, a hook and fall to her death quite often. At some points in the game, the camera angle doesn’t change with Lara to allow her to climb down. This is irritating and I found that in order to not die – because of the weird camera angle – the best thing to do was to invert the camera so that Lara runs to you and then climb down. Otherwise going forward will keep Lara facing the ledge and the camera facing Lara, essentially making you blind as to what lies beneath.

The UI is also clunky, and I found positioning the mouse on the map to set waypoints very annoying. Icons overlap each other in such a way that you often end up highlighting something else.

Combat:
The action is this game is slick but not as much as there should have been. And that is a shame because there are many new weapons to be had this time around. To top that, the game introduces new combat mechanics, such as increased stealth, more cover, the ability to craft grenades and booby-traps from objects lying around, and camouflage techniques to tackle enemies. 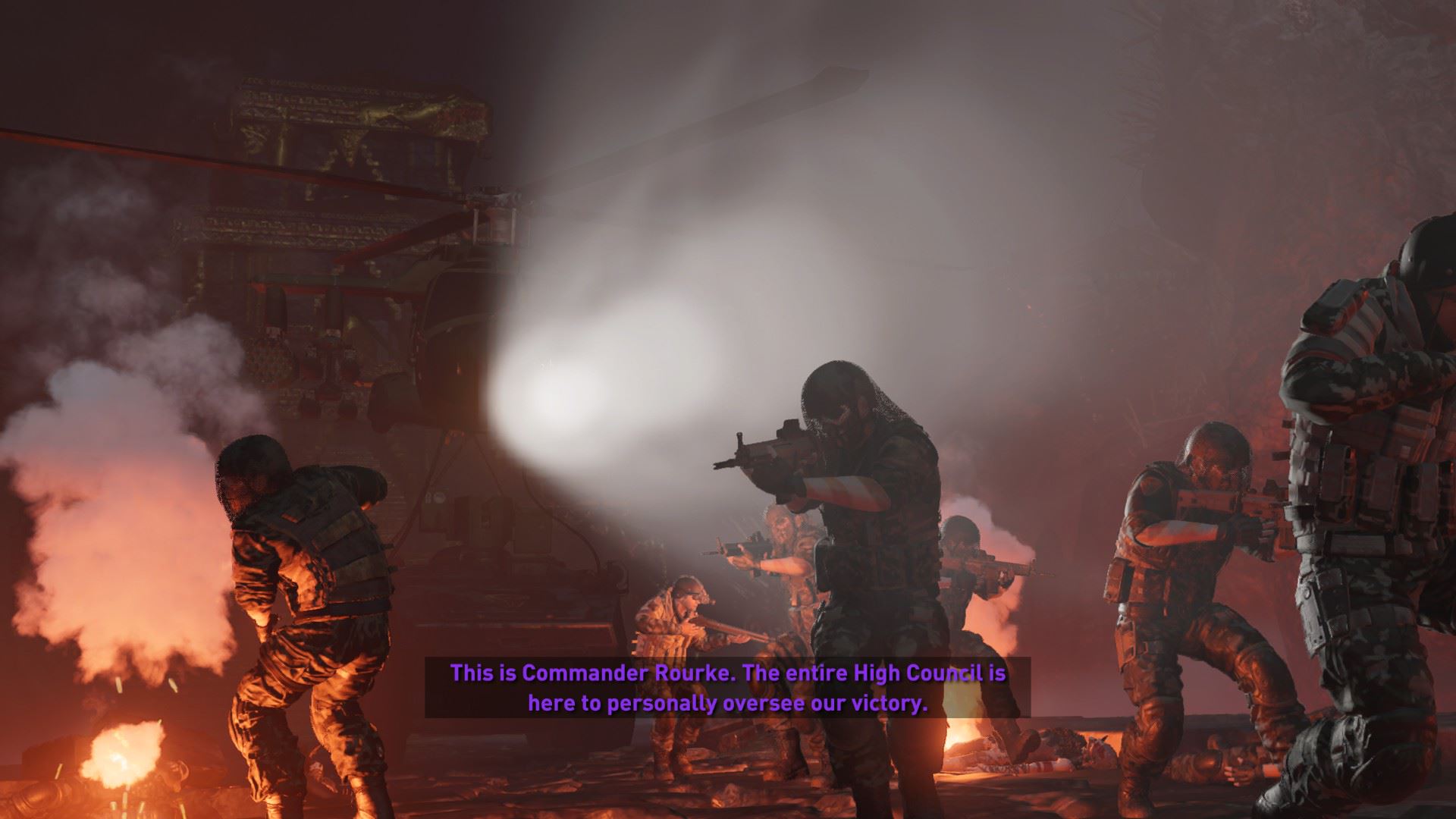 Having said that, the enemies are rather generic in this game and except for a couple of types who have a thermal imaging attached to their helmets (a.k.a Arkham Games comes to mind), you’d find it an undercooked mechanic in the game. It leaves a lot to be desired and the game could have done a lot more. However, when the combat does happen, it’s tactical and engaging and I only wish there were more instances of it.

There are also brief segments where Lara fights with wild creatures and a special enemy that guards underground tombs; nothing that your weapons can’t handle though. Graphics:
SOTR actually was developed on the same engine as ROTR therefore, with more polygons and detail on-screen than ever before, the game is graphically demanding. Being set in a jungle, there is a lot of detail and visual eye candy in this game and it looks gorgeous, in my opinion. The devs have seemed to put in as much of detail as possibly can. I played on medium setting as my 2Gb card could only take that much of a beating. However, I managed to get 30-45 frames throughout the campaign. There are quite a number of things you can tweak to make sure it gives you a good playing experience. But all in all, this is one hell of a good-looking game. 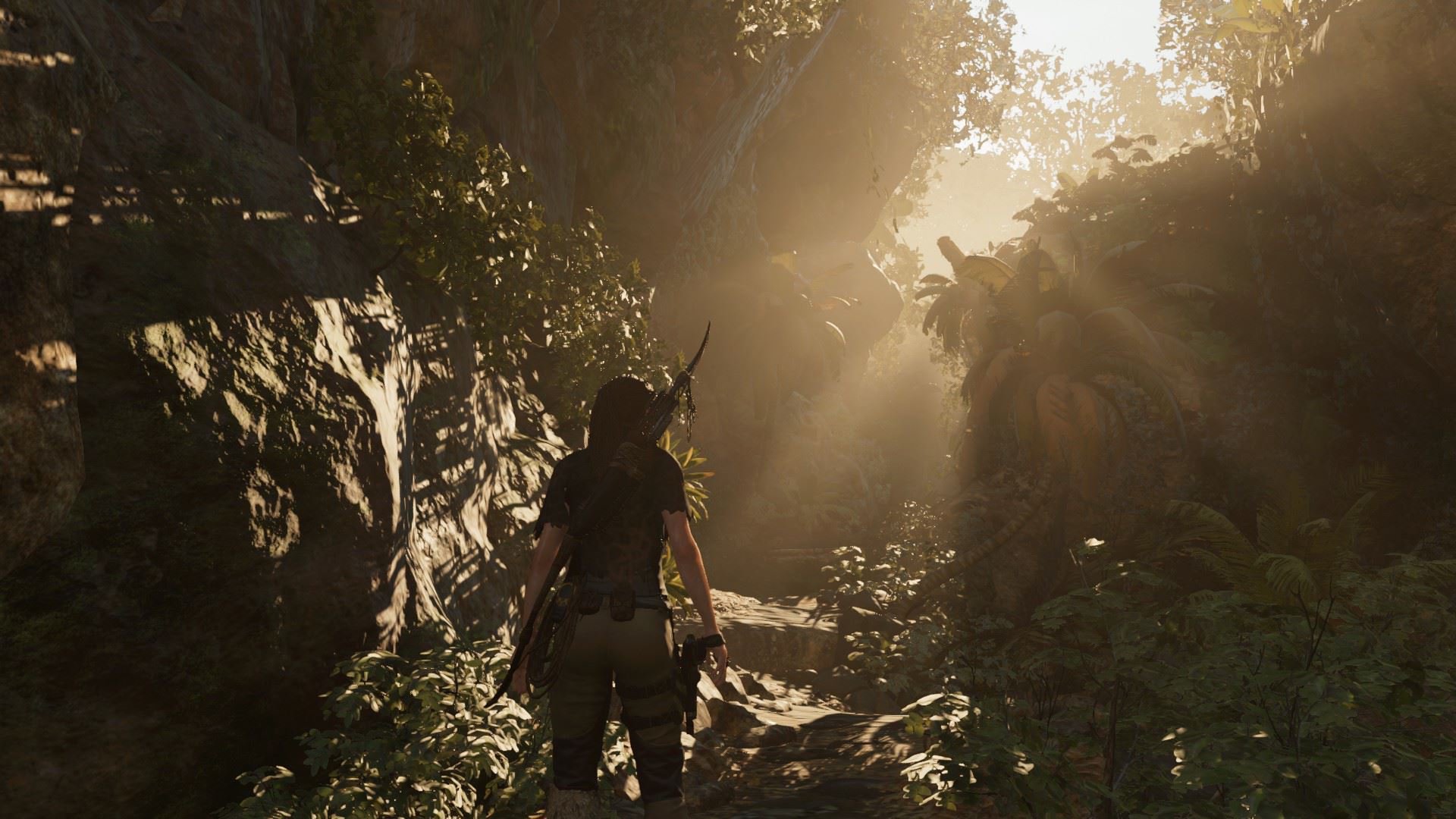 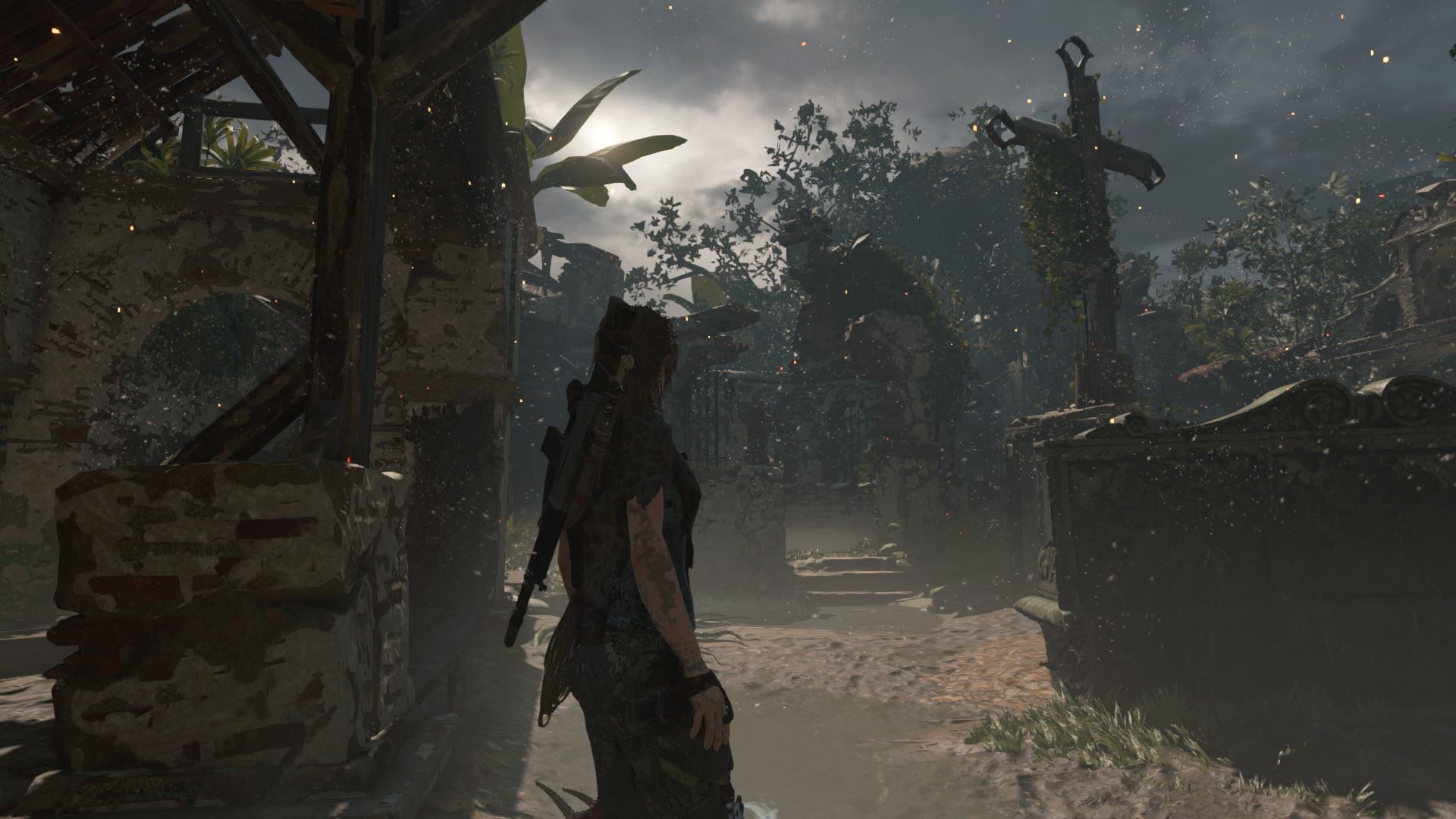 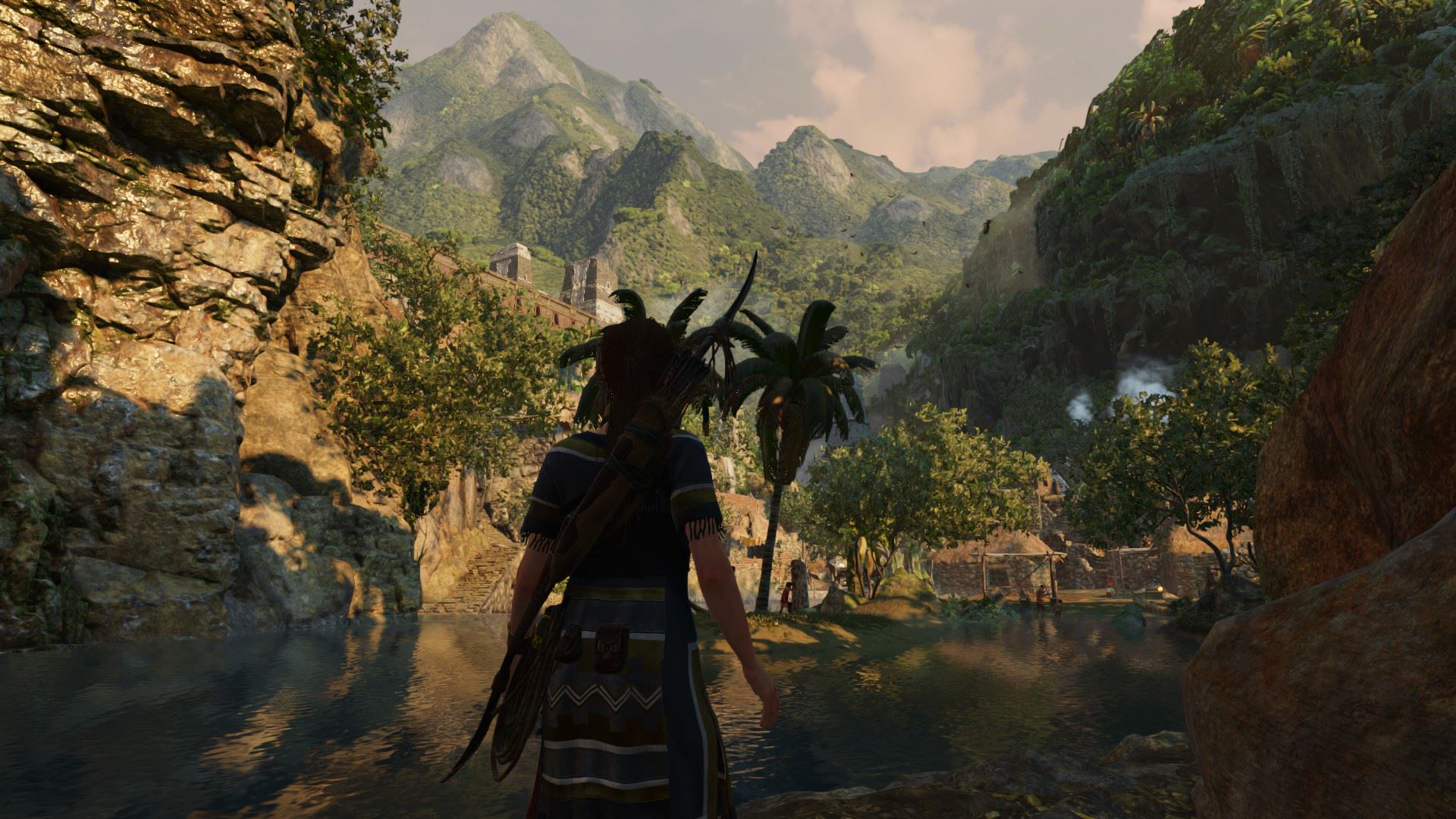 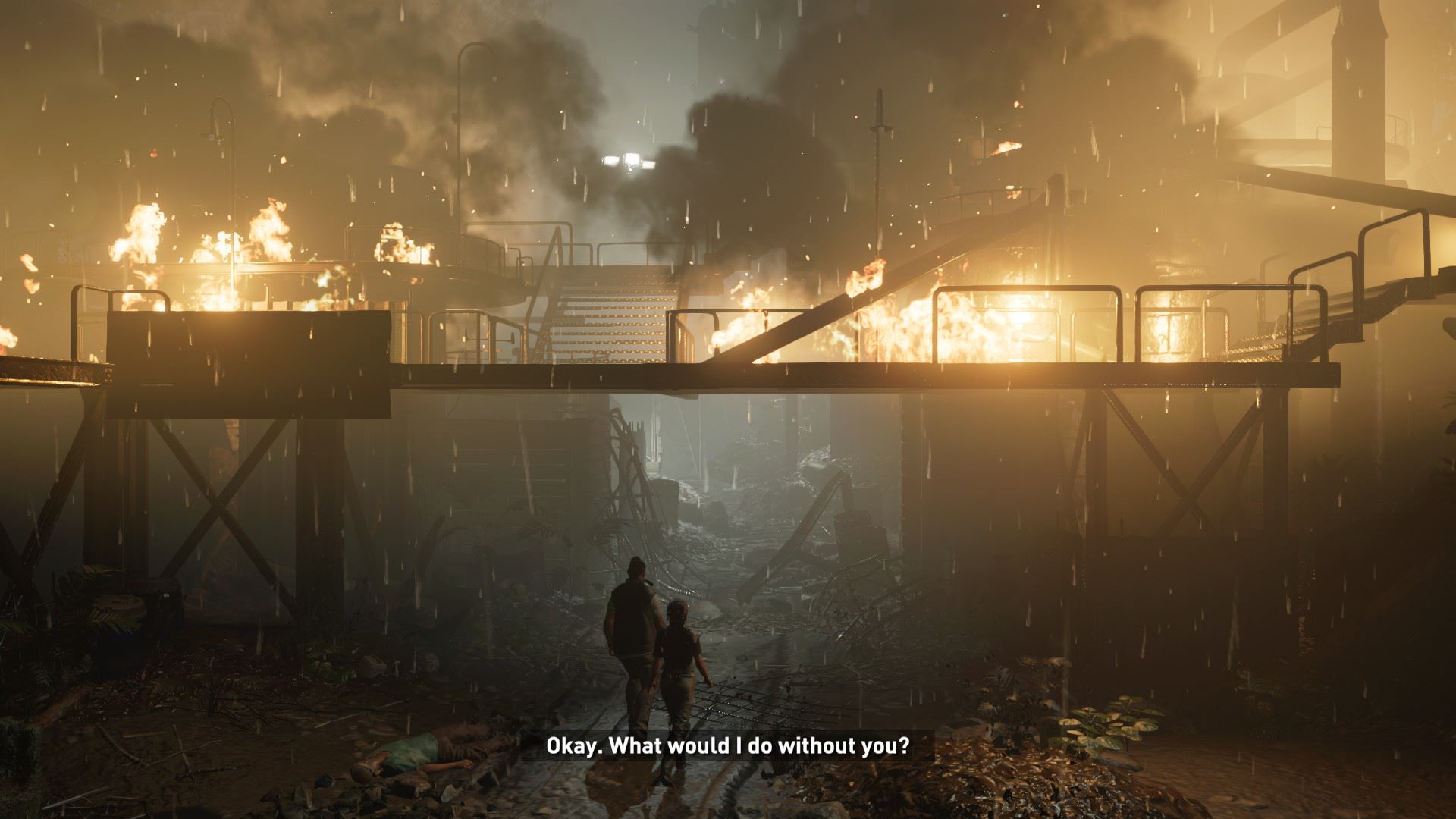 Overall verdict:
Tomb Raider has come a long way since its reboot in 2013. Its world, lore and characters have grown mature over time. It is certainly a game which puts an emphasis on pain, struggle and loss – it feels less of an adventuring game and more of a survival sim at times: everything has a drastic end. However, the game’s core message this time around seems to be that destiny is the culmination of chaotic events and choices and that the sum total of all our suffering is defined by our choices. And that some things are not just good and evil but inevitable and necessary.

In the end, Lara has made peace with her past – with the loss of her parents. And that is a good thing. 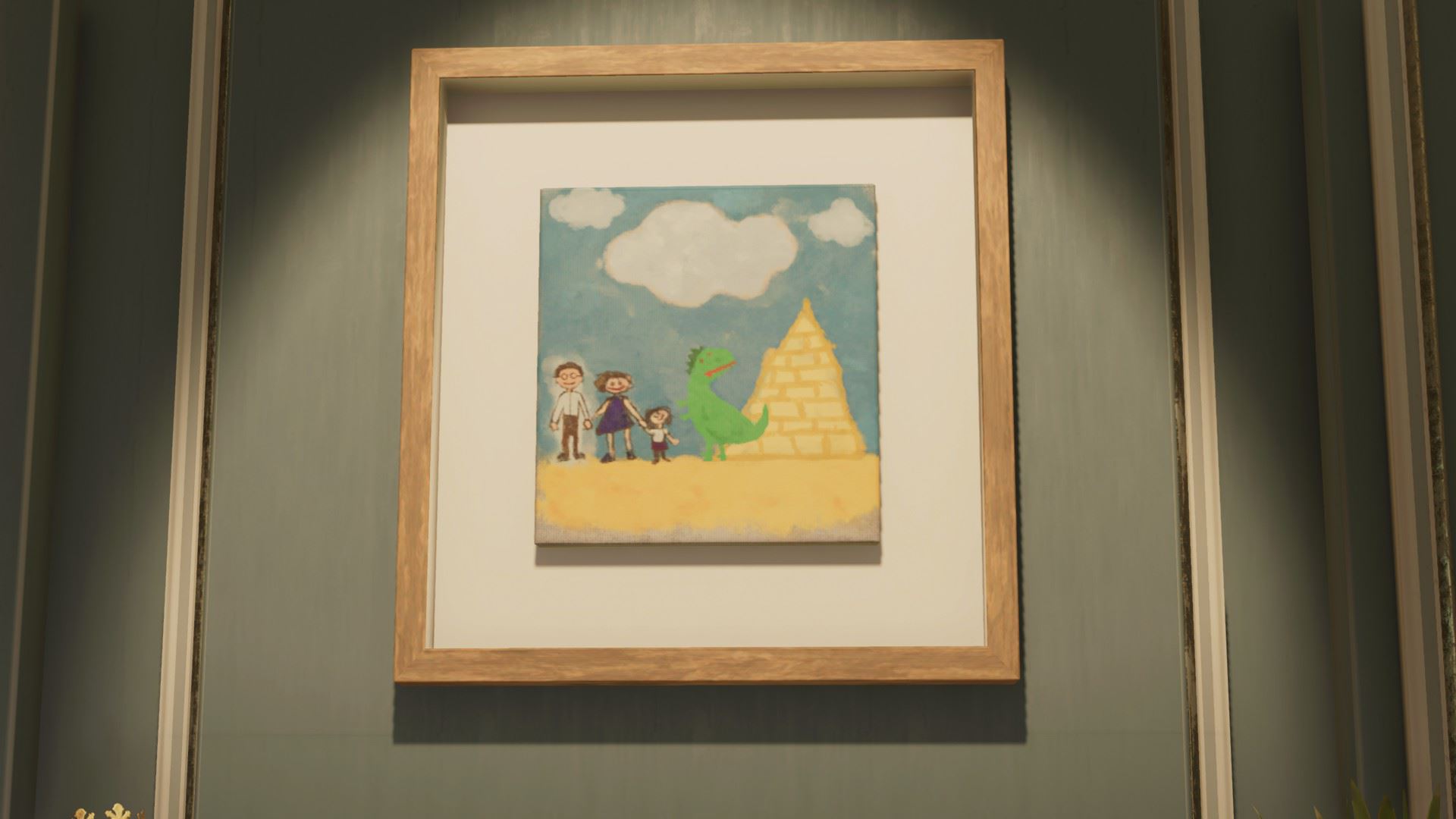 After you have completed the main story, you can either resume back the game just before the final mission starts and collect anything that you were unable to the first time around or start New game + mode, which lets you keep all of your upgrades and equipment from the very beginning. I’m going to start a second play through.