People loved Arkham Asylum, they adored Arkham City but had mixed reactions for Arkham Origins. Now witness an epic conclusion to the Arkham storyline as Batman (voiced by Kevin Conroy) uses his detective skills to stop his nemesis Scarecrow (voiced by John Noble), who has joined hands with an unknown Batman-look-alike enemy who calls himself the Arkham Knight, as Gotham City has been threatened once again.

In the final installment of Rocksteady’s trilogy of Batman games, the developers really outdid themselves with the graphics. The game looks magnificent. Just the rain dripping on the Batman’s suit and cape looks absolutely stunning. The quality of the environment like lightning, smoke, rain and small details really feels like a game which is to be played on next-generation consoles. Gotham City, in terms of size, is so huge that it feels like three Arkham Cities put together. You can scale Wayne Tower and jump off again with no restrictions.

Rocksteady paid attention to what fans demanded what felt missing the most in the last two games and they delivered: the Batmobile. Driving the Batmobile (Part car, part tank) around Gotham City is a remarkable addition to the Arkham series. It can smash through concrete walls, drive through rooftops and slingshot Batman into the air for a glide boost or a pre-emptive attack. It can also be used to quickly stun (and not kill) the Militia Army provided by the Scarecrow and the mysterious Arkham Knight. Unfortunately, Rocksteady over-complicates it as players find themselves using the Batmobile against the robot tanks and unmanned drones in almost every mission. For the first few times it was fun, but later it felt like being shoved down our throats.

Storytelling is among the game’s greatest strengths as this is one of those games in which every cut scene will have you at the edge of your seat, not wanting to miss a single dialogue. The story takes place years after Arkham City when Batman had to endure the losses of Ra’s al Ghul, Talia and his arch nemesis; the Joker. Now Scarecrow has teamed himself with Arkham Knight, who not only looks like him but fights like him as well. Batman, with the help from his butler, Alfred, GCPD Commissioner Gordon and his daughter, Oracle, has to stop them from releasing the Fear Gas and poisoning Gotham.

More new characters are introduced in this game, most notably Lucius Fox, the CEO and President of Wayne Enterprises, who designs new gadgets for the Caped Crusader to help him save the people of Gotham. We also get to play as Robin and Nightwing in the main storyline. With the introduction of Dual-play, Batman takes down thugs and Militia side-by-side with one of his partners (Robin, Nightwing and Catwoman) and execute some brilliant dual-play takedown moves. It may feel repetitive but it knocks out an enemy instantly, and besides, teaming up with a sidekick is what Batman is all about. 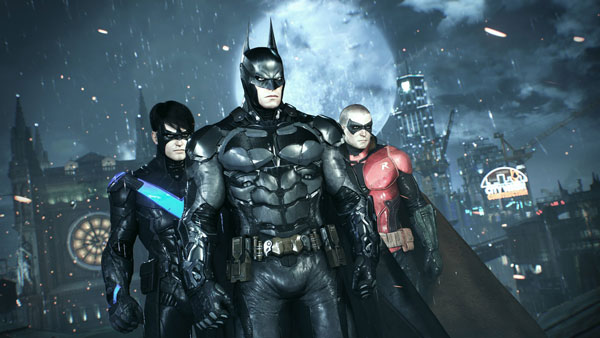 Meanwhile, the stand-alone strike-and-counter brawling feels better and smoother than ever. They’ve been upgraded with powerful new mechanics and dozens of new takedowns that will take time to master. Most prominent are the fear multi-takedown in predator fights, in which Batman takes down up to five enemies at once, and the voice synthesizer that is used to lure thugs to different places in order to take them down quietly. What was disappointing in this game was the lack of boss fights. The boss fights in previous Arkham games were praised heavily as it created excitement and suspense leading up to the thrilling end to the game. This time, however, the end felt like one big cut scene where the player just had to walk around as the story was leading to its conclusion.

There are also a few awesome side quests which can be played anytime if the player gets tired of the 12-14 hours long main-story campaign. These side missions are built around some other notable villains; Two-Face, Penguin and the Riddler. Each mission series has its own gameplay style. Two-Face’ thugs are robbing banks who are to be taken down using predator fights. Riddler’s quests are the most challenging as players have to use the Batmobile to solve tricky riddles in order to save Catwoman. Penguin’s crew are collecting illegal arms to use against Batman and the GCPD, who can be taken down by the normal strike-and-counter brawling.

In the end, Arkham Knight is easily the best Batman game and by that measure, the best superhero game to date. When you say the worst thing about this game is too much of a good thing, you can expect this to be nominated for the Game of the Year.
With stunning graphics, exciting action sequence and a nail-biting finish to the series, one does not have to be a comic-book fan to enjoy this game. This is the perfect sign-off for Rocksteady’s Dark Knight.

This is the Batman game fans deserve, and the one they need right now.