Valve’s Steam Deck in our hands 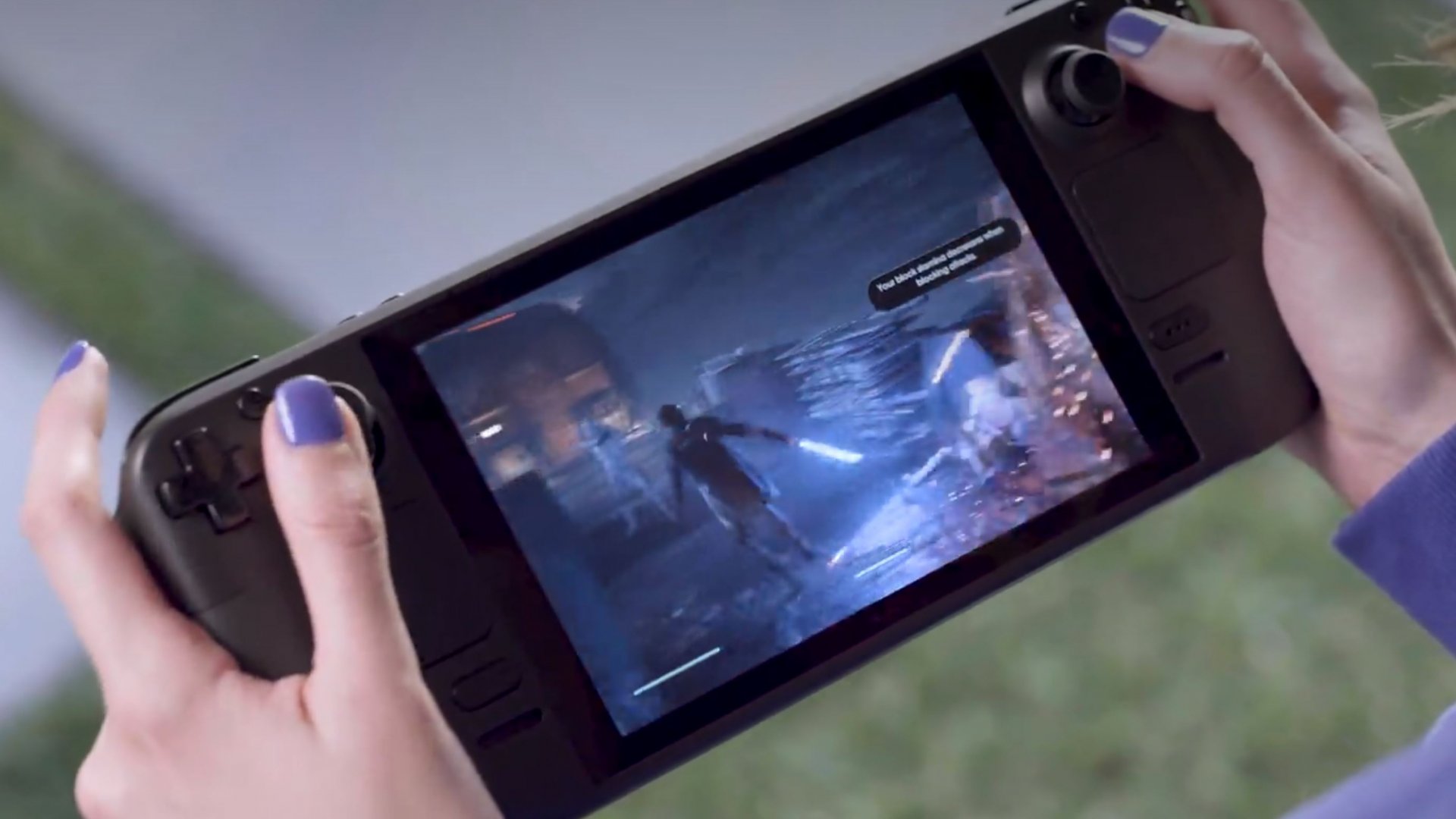 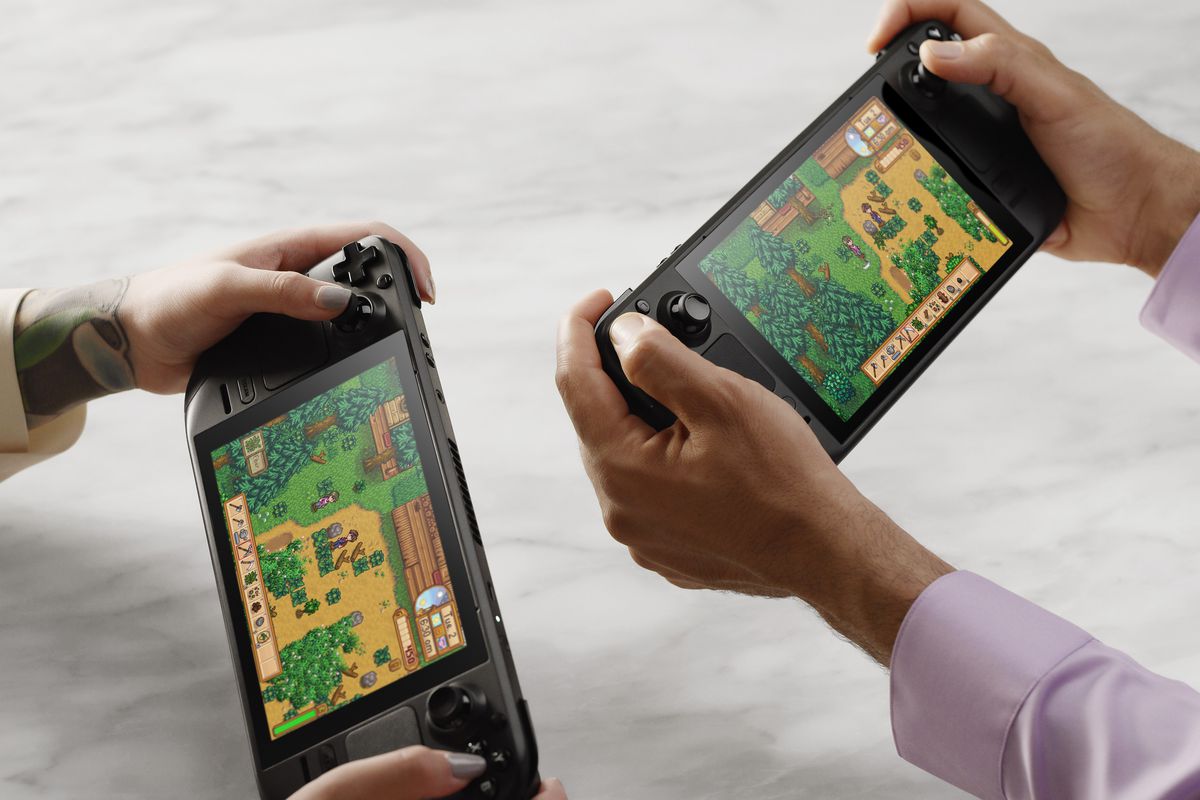 The Steam Deck is a new handheld device from Valve for playing PC games on the go, the company announced Thursday. The Nintendo Switch-like device is set for release in December starting at $399.

Previously rumored as the “SteamPal,” the Steam Deck is a portable PC that’s slightly larger than the Nintendo Switch. It features a 7-inch touchscreen, two thumbsticks, a D-pad, and a four-button layout. There are also two trackpads — one on either side of the machine, under the thumbsticks — to allow for increased precision. The Steam Deck has eight triggers on its back: four on the device’s shoulders and four more where the ring and pinky fingers rest.

The Steam Deck will run games from players’ existing Steam libraries. Players will simply log into their account, and their friends and catalog should follow them onto the handheld. The Steam Deck is capable of running PC games on its own hardware, without the power of the cloud. Videos released by Valve show people using the Steam Deck to natively play games such as Baldur’s Gate 3, Crusader Kings 3, Disco Elysium, Hades, and Star Wars Jedi: Fallen Order. Players can also purchase a dock that allows the Steam Deck to run on a TV.

Inside, the Steam Deck boasts an accelerated processing unit (APU) built by AMD. Its CPU is based on the company’s Zen 2 microarchitecture and tops out at 3.5 GHz. The GPU contains eight RDNA 2 compute units running at up to 1.6 GHz, delivering peak performance of 1.6 teraflops. The system packs 16 GB of RAM and a microSD card slot, allowing users to expand upon the built-in storage. The Steam Deck’s 7-inch screen is an LCD with a 16:10 aspect ratio and a 60 Hz refresh rate at a 720p resolution of 1280x800. The Steam Deck also features a dual-band 802.11ac Wi-Fi radio — it’s compatible with 2.4 GHz and 5 GHz networks — and Bluetooth 5.0 for controllers, accessories, and (unlike the Switch) audio.


At launch, the Steam Deck will be available in three models with different storage options. Valve says there are no performance differences between the three versions — aside from the speed of the flash memory, which will provide varying read and write speeds.

The $399 base model offers 64 GB of storage in the eMMC format. The next model up costs $529, and packs faster storage courtesy of a 256 GB PCIe 3.0 NVMe SSD; it also comes with an “exclusive Steam Community profile bundle.” The top-tier Steam Deck, at $649, includes a 512 GB NVMe SSD that Valve refers to as “high-speed,” although it is still a PCIe 3.0 drive. In addition, this model’s screen features “premium anti-glare etched glass.” The unit comes with an exclusive carrying case and exclusive virtual keyboard theme, on top of the cheaper models’ bonuses.

Steam users will be able to reserve any of the three Steam Deck models (for a fee) starting at 1 p.m. EDT on Friday, July 16 — as long as they made a purchase on the Steam Store at some point before June 2021. If not, they’ll have to wait until 48 hours later.
Last edited by a moderator: May 20, 2022

manigamer
Seriously ! Why do you want to KNOW ? gaming, movie's, sometime's music and eating junkfood...
View all 2 featured items

Necrokiller said:
And there is only one handheld that can play God of War

technically i played god of war chains of olympus etc on my psp so that was the first handheld that played owned and developed by sony to play god of war.
Reactions: Necrokiller

manigamer said:
technically i played god of war chains of olympus etc on my psp so that was the first handheld that played owned and developed by sony to play god of war.
Click to expand...

lol technically I was talking about the same God of War that was released for a console i.e. God of War 2018. But since you mentioned Chains of Olympus, worth pointing out that Steam Deck will be the only handheld where you can play all God of War games

So CerebralTiger is already planning to play Crysis 4 on Switch instead of PS5? Yikesss

This is kinda unfair. That other handheld, even if it ever gets the same fighting games, doesn't even have a DPAD

Someone has spotted a UI update to Half-Life 2 for the Steam Deck that can tested on desktop as well. 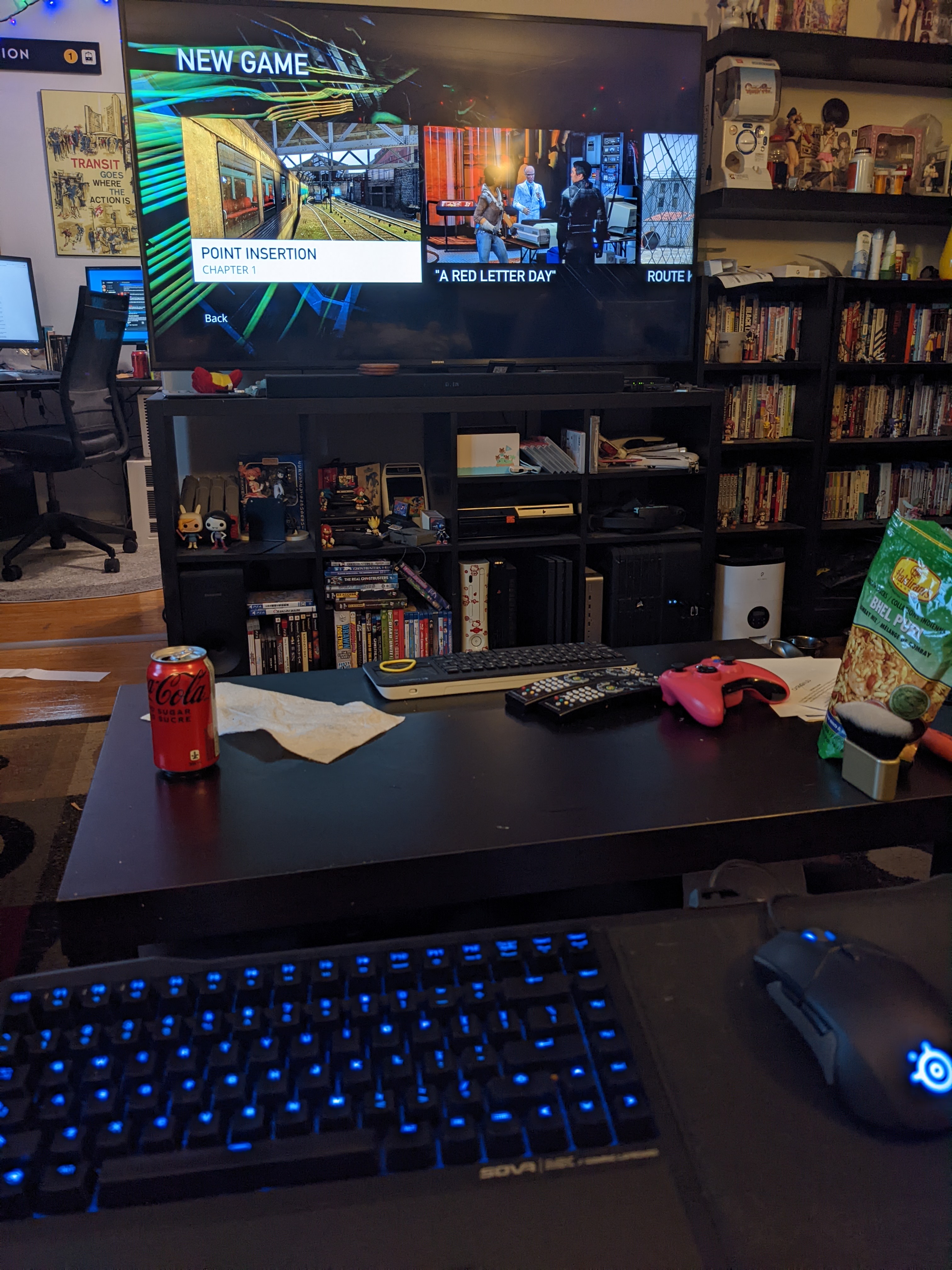 CerebralTiger said:
It also strengthens the case for Steam Deck (for those not interested in a PC), a console that'll be able to run PS and Xbox games w/ no subscription required to play online.
Click to expand...

Such console, much customizability
Reactions: CerebralTiger

I mean, you don't have to customize it if you don't want to. Nice to have options tho

Except that you can't customize to this degree on a console, even if you want to. No oooooptions for you
Reactions: CerebralTiger

Imagine thinking Switch is a comfortable device to hold

This behemoth has a bigger footprint than a lot of tablets

CerebralTiger said:
I'm not looking for that sort of convenience. Most of my time spent on the Switch is in docked mode

CerebralTiger said:
Yeah, but I carry it over to other places to play in docked mode.
Click to expand...

What's the next terrible take on your agenda CerebralTiger? Laptops aren't portable because you can't fit them in your pocket?

This behemoth doesn't even come with a dock. Good thing for Necrokiller that he already has a spare one lying around for whatever reason

Gaming laptops are pretty bulky and a chore to carry around, even in a bag

Post meri quote ki jis mein dock mentioned hai as a preference, then calling it daft when I point out there's no dock with the Deck. That's an approach

The lack of modularity really hurts this behemoth of a device. No way to detach the left and right controllers means you can't:

CerebralTiger said:
The lack of modularity really hurts this behemoth of a device.
Click to expand...

Jab stick drift hoga then you can and you will

I had no idea CerebralTiger hated the Switch Lite so much