[OT] The TV SHOW Thread: Watch, Discuss and Have Fun! No Open Spoilers!!

i read here that it was good and similar review on youtube etc so i started watching it and waited maybe the good part will start and so far i have even started s02 but still its really very stupid kind of show, i dont know why any one even likes it

does it gets any better or should i just stop watching it?

ACS deliver it once again. A masterful direction with some serious acting. 9/10.

Dark on Netflix is a MUST WATCH. THE best show I've watched on Netflix.

sumair007 said:
TV shows that I have watched completely......

how's the Dexter & the wire?

The Wire is probably the best TV show I've seen in recent years. Its about Baltimore Police trying to control drug dealers in the city. If u like such kind of shows revolving around corrupt police officers, corrupt government officials, drug lords, gangsters, betrayals and all......this show is the best. The cast is nice as well with names like Idris Elba, Aidan Gillen, Dominic West and Lance Riddick. If u have seen Suits and noticed how sometimes Mike Ross says "shiiiiiiiiitt" this is in reference to Wendell Pierce's character who says shit exactly like this and who played Rachel Zane's father in suits! However the show is quite long, most of the people will find it boring during the first few episodes but once it picks up the pace, damn u'll be completely sucked into it. I would definitely recommend it (Y)

Dexter on the other hand is not as serious as The Wire, its about a forensic specialist who works in Miami Police and at nights he's serial killer but since he's a forensic expert he can cover his tracks easily. The first season was nice, the next two seasons sucked but then came the fourth season when he faces off against another killer called the Trinity. Damn shit got serious then! I'd say only after watching the fourth season this show will get your interest. So its kinda like 50/50, survive the first 3 seasons to really enjoy it.

DareDevil season 3 was awesome , hope they don't cancel like they have done with luke cage and iron fist
any one watches deuce its from same creator of the wire , to bad it will end after season 3 next year

Finished The Haunting of Hill House and i must say i have never seen anything like that before. Did watch so many horror movies but The Haunting of Hill House was better from all those movies. The spookiness, acting, story, characters, direction every single thing was perfect. No cuts and bumps or jump scares (only one or two in whole series) one shot long scenes even dialogue scenes were smooth. The way the story goes back & forth was just amazing. It did get slow in the middle to explain the mental status of the family. There are only 10 episodes of it, first 4 episodes were a kind of introduction of characters. I Saw 4 episodes in last month and left it. Yesterday saw 5th episode and i was so hooked to it that i saw remaining 6 episodes in one go.If you are a fan of horror movies that this is a must watch 10/10.

Finished The Terror, wow man...mind boggling stuff. Its have just 9,10 episode, miniseries kinda thing but addictive stuff
and its based on some kind of real story. so something to look forward to for you guys.

Also anybody here watched Riverdale? I am currently watching season 1 and its quite addictive but why the low rating on IMDB.

Finished The Rain its danish tv series, although reviews were not in favor but i watched it any ways because of
its premises....epidemic disease, apocalyptic world etc. it was ok imo.

@UltraViolet yeah riverdale is fun. the first seaosn is quite good, i finished s2 just few weeks back now waiting for s3 to finish so i can watch daily 2-3 epiosdes and enjoy... its got all that mystery, raging teen hormones, teen drama and shit lol

manigamer said:
@UltraViolet yeah riverdale is fun. the first seaosn is quite good, i finished s2 just few weeks back now waiting for s3 to finish so i can watch daily 2-3 epiosdes and enjoy... its got all that mystery, raging teen hormones, teen drama and shit lol
Click to expand...

Yes Just finished first season and it was really good although finale was not upto the mark but still looking forward to season 2.
F

started SUITS now and loving it does anyone have any idea about sherlock holmes? hows it?
G

need suggestions for any good tv series like Strike Back
[MENTION=143594]fatima khan[/MENTION]
Sherlock is a really good series.

Dang. Jessica Jones got freaking cancelled and won't be renewed for a fourth season.
Although season 3 is coming.


Sent from my SM-G920I using Tapatalk 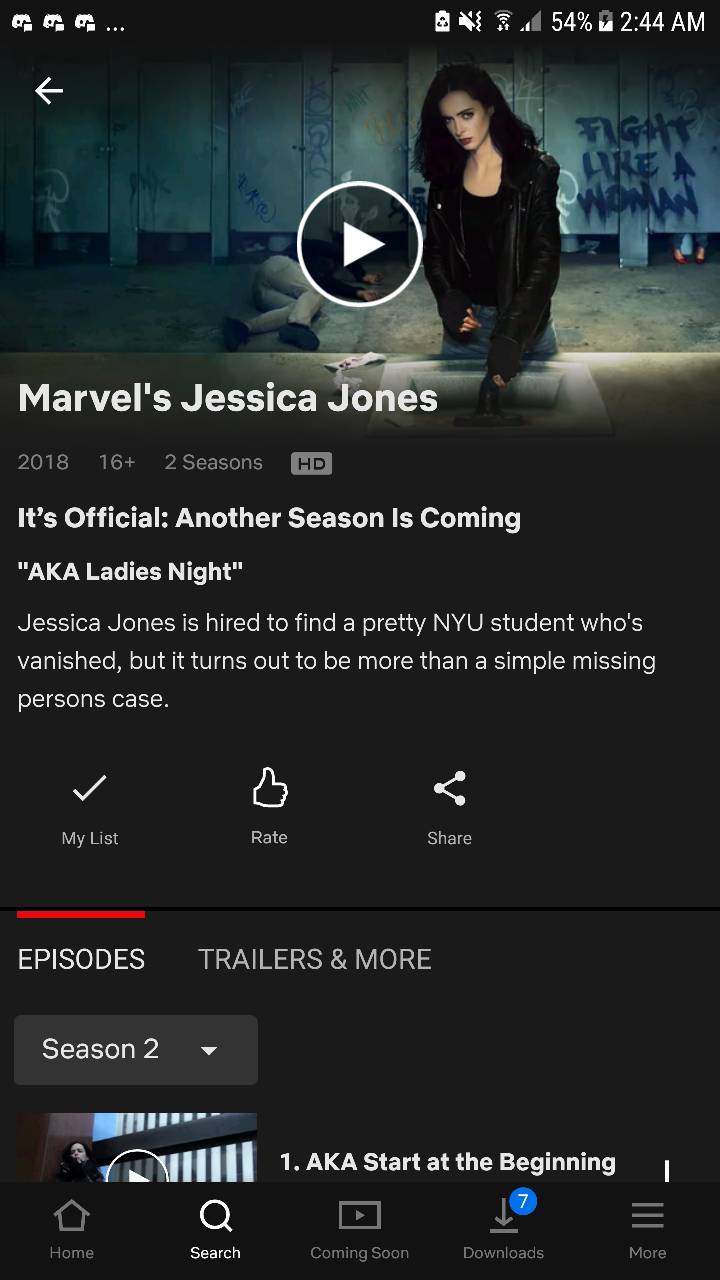 Pretty good settings i must say it was going alright but ending episodes left a lot to be desired.Hope they improve in 2nd season.

Now this was a treat to watch Netflix can survive without Marvel and this show proves it amazing cast and story satisfied with it.