The Slayer Gates are insane!


Scenarios like these are still when the game is at its best. The platforming (to a certain extent) and story focus are needless additions.
Last edited: Mar 22, 2020

Bethesda, I cannot believe it. You have done something unimaginable. You have actually made a competent sequel.

Everything is improved. Like Everything. From a better engine to all the updated assets. Environments are bigger and dance of death is much more cerebral with the focus on weak points. Story is even more fleshed with skippable cutscenes from the very start. Best FPS just got better.
Last edited: Mar 23, 2020

Universal praise is temporary, but Doom is Eternal :hah:

Well, clearly not great enough for universal praise from the all the reviewers. Something ID Software have yet to prove ¯\_( ͡° ͜ʖ ͡°)_/¯

I can't wait to see No Damage videos on this channel of the Marauder fight on Nightmare difficulty. Saara "great gameplay" saamne aajaye ga :lol:

That too, with a controller.

Mood which game is MOOD ! i can't find the case for the game mood anywhere

Mood which game is MOOD ! i can't find the case for the game mood anywhere
Click to expand...

Probably because it represents the MooD and not a game.

Major Aly said:
And I'm done with the plat...

Decent enough sequel, I will still prefer Doom (2016) in terms of grunge-yness, OST, slice of comedy lol
Click to expand...

Sent from my S9+ using Tapatalk

Between Dash cooldown, flame belch cooldown, grenades cooldown, weapon mod cooldown, having 8 or so weapons at a time and still running out of ammo in all of them constantly (atleast on the higher difficulties, maybe not so bad on normal/easy), the game overburdens you with resource management. Not helped by the fact that many arena's in late game are too compact to support the game's movement and dozens upon dozens on enemies at once. Its a perfect example of solid gameplay marred by questionable game design choices. Eternal has higher highs than Doom 2016, but also lower lows.

Doom Eternal's official soundtrack wasn't mixed by its composer, and you can tell

Haven't you heard its the new 90, Still better than FF7R


Doom Slayer: Go clean up the mess you made of heaven and hell on Oct. 20


Doom Eternal’s first campaign extension, The Ancient Gods: Part One, puts sinners in the hand of a very angry demon on Oct. 20. id Software and Bethesda Softworks revealed and dated the expansion at Gamescom on Aug. 27.


Bethesda’s news release says players will “confront an ancient evil awoken from an imbalance in the heavens.” The baddies players mow down will include “fierce new demons,” the statement said.

The Ancient Gods was announced at the beginning of QuakeCon 2020 two weeks ago. The Ancient Gods’ narrative begins right after the end of the story campaign. Evidently, the Doom Slayer’s destruction and death-dealing during the main game has knocked heaven and hell out of balance. So it’s your job to clean up the mess, likely by making a bloodier one.

Doom Eternal launched March 20 on Google Stadia, Nintendo Switch, PlayStation 4, Windows PC, and Xbox One. Bethesda Softworks said on Aug. 6 that players who own the game on PS4 or Xbox One may upgrade for free to PlayStation 5 or Xbox Series X, respectively, after those consoles launch.

Has there been any news who's handling the OST for the DLC after Mick Gordon?

You don't need to own Doom Eternal to play The Ancient Gods, Part One

During Gamescom's Opening Night Live, we saw a trailer for Doom Eternal expansion The Ancient Gods, Part One. To summarize: Somebody heard you hate the Marauder, so now here's two of them at once.
In an interview with PCGamesN, id Software executive producer Marty Stratton explained that it will be an expandalone, only he didn't use that beautiful word for some reason. What he said was, "we want the DLC to reach as many people as possible. In fact, you don't even need to own Doom Eternal to buy the DLC and play it."
Game director Hugo Martin clarified that it'll be a sizeable experience. "Most people would associate DLC with being of smaller scope – it's kind of like the made for TV version of the movie, and the movie was the main game," he said. "For us, this is very much like a two-part film – this is every bit as grand as the main game was."
The first part is due on October 20. As for part two, "They're both part of the Year One Pass," Stratton told PCGamesN. "So, you can suppose that they’re both within a year of launch." 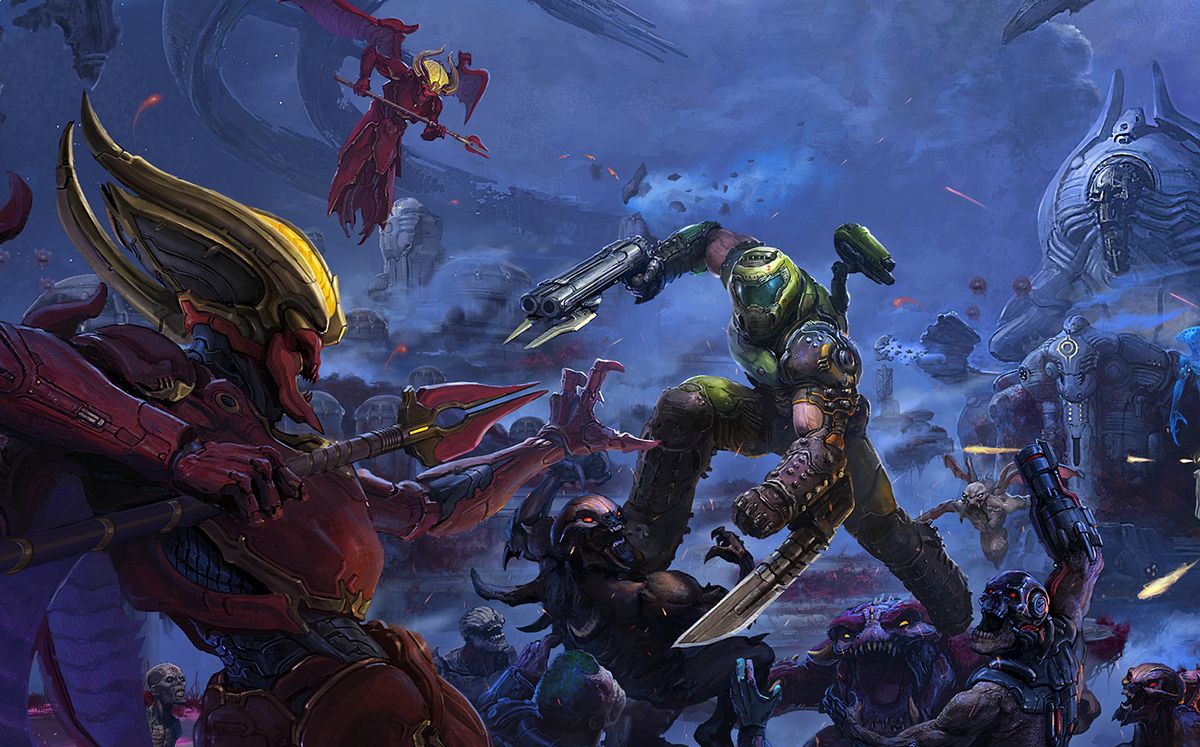 You don't need to own Doom Eternal to play The Ancient Gods, Part One

The DLC will be available as a standalone.

Looks like the Switch port of Doom Eternal has been quietly canceled.

People who pre-ordered on Gamestop are getting calls about it being canceled and Amazon and Best Buy have quietly removed the product pages for it.

Take this with a grain of salt since there has been no official announcement, but there's a lot of people that preordered Doom Eternal on Switch who have been receiving calls from GameStop that's saying Bethesda canceled plans to release Doom Eternal on the Switch. Here are just a few examples...